I have been lucky enough to go to Maine three times this year (so far).

In June we took a little anniversary trip to Rockland which is on the mid-coast. One of the many things I enjoy about Maine and really anywhere I go are the quirky things that we come across. In Rockland I saw this:

In July three college friends and I spent a week at a lake house in Washington Maine to celebrate 42 years of friendship and turning 60. I still don’t know what turning 60 means for me. It sounds so old but I don’t feel any different so maybe it isn’t that big a deal. I don’t know!

In August we spent time with our son on his property in Freedom Maine. Only 13 miles from Washington. An hour from Rockland.  I made some good potato salad with his first harvest. 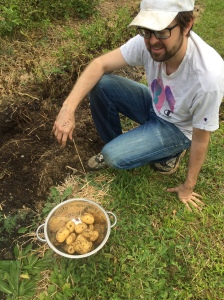 We visited our friend Emily who homesteads with her partner.

The weekend after Labor Day, this time in Searsport, I will be teaching workshops at the Maine College of Fiber. I will teach drop spindling, wool combing to prepare fiber for spinning, and chain plying which creates a 3 ply homespun yarn. I will do a demonstration of the hackle too. 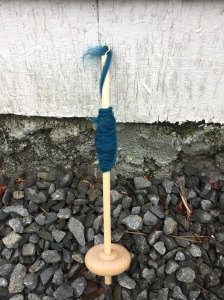 Drop spindle I made from toy wheel

Who wouldn’t love playing with tools that look like medieval torture instruments? 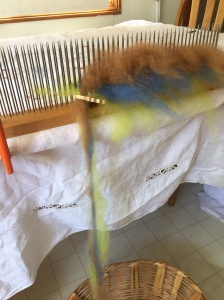 alpaca and wool ready to spin after being removed from hackle

I’ve always said I’d move north before I’d move south. The snow and the cold don’t bother me because I know how to bundle up and keep warm and I guess I have thick blood or something. I am always happiest away from cooky cutter suburbia and cities. Maybe we’ll move to the coast of Maine one day. Maybe not. Who knows!  My fellow 60 year olds and I now say “We’re 60. We can do whatever we want!”