I knew I hadn’t written a post in a while but just saw that it was three months. I guess I can attribute that to our hot dry summer. Not much energy to do anything when there is humidity.  What I will remember of it though is that it has been full of family, friends, fiber and flowers.

Recently a friend took me to an iris auction. I never knew such things existed. I have some iris that were here when we moved in and she has given me more. Iris aren’t blooming now 🙂  so here are my spring pictures.

I am always interested in how things work and the commonalities of dynamics in different groups. For example, at the auction I learned that there are different types of iris i.e. Siberian,  Bearded, and that experts who create new iris within those areas are well known to the people who enjoy the flowers. Just as in our fiber pursuits we know different sheep breeds and their attributes and know of/have met many of the breeders whose fleeces we know of to be good quality. Just a different medium, that’s all. It was a lot of fun to watch the auction and to feel the good energy that one always feels around people following their passions. We need all of that kind of energy in this world that we can get.

I purchased 3 iris but then had to figure out where to put them. My iris beds are full already. I decided to put in a new bed by the shed. To be honest that means Steve digs it out. Then I decided to move into it the iris my friend gave me and some lillies also given to me a while back. I would usually never show anyone a picture of how a transplanted bed looks right after I create it because the poor plants are often in shock and don’t look their best. But I did here because as I was planting I decided to have fun adding in some meaningful ornaments.

On the far upper left is a green/brown ceramic looking piece right against the green grass. It was once on the roof of the carriage house at the Harkness estate which is now a state park in my hometown of Waterford CT. We were there one day when I was hosting a family reunion and the roof was being replaced. A pile of them lay on the ground with a sign that we could take one. I love that place and am happy to have this remembrance. It goes in a garden wherever I am living. On the bottom left are brick pieces from an old woolen mill we lived near in Jefferson MA. Just lying on the ground where we would walk. The upper right has a broken flower pot from a couple years ago when I asked Steve to take off part of a side for fairy garden items that I put together for some young girls in the neighborhood. And hard to see but on the right  is my little fairy that I had elsewhere in the spring. In the middle at the top is a piece of pottery found on our property here.

We have a house built in the 1830s and the previous owners left us things found here. I have found more through gardening and the chickens sometimes dig them up for me. I suspect that the area by our very old coop might have also been a place they dumped things before the trash pick up that we have now. A tiny archeology site.

In other gardening news, the herb spiral that my son put in for me is growing well. I  am adding rocks to it that I find along the way. I put in two from a beach in S. Thomaston Maine where we visited, Sarah Orne Jewett territory (if you haven’t read The Country of the Pointed Firs get it today if not sooner), one from my son’s place in Freedom Maine and one from my cousin’s house in NY which is the home he grew up in and full of memories for me. 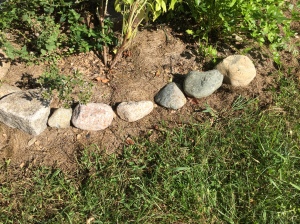 Mother Nature is always entertaining no matter what the season. The other day I was watering the basil and took a close look at a bumblebee on a flower. So cute to see it put its whole head in the flower. I let it and the mint and oregano go to flower at this time of year since the pollinators love them so.

Mother Nature also sends hints. The other day while I was cleaning up the herb spiral I found this:

I have frozen tomatoes for winter spaghetti sauce and am picking dead marigold heads from here and anywhere else I am allowed to use as a natural dye in October at a workshop we are teaching. Herbs have been dried and a fall beet row planted.

Now if it would just cool off and actually feel like autumn, my favorite season, and rain some, all would be well. It’s pretty good even so.