I have been thinking about fall being a time of harvest in colder climates such as ours in New England. I do believe we see effects of climate change here because twenty years ago we would have a hard frost by the end of September and it would have stayed cold until we had a few days of warmth called an Indian summer. Our first frost now comes well into October and we no longer have an Indian summer because it doesn’t follow the pattern of getting really cold and then warming up for a few days. It stays warmer longer and just gets colder over time. We get frosts at night but the days remain warm so it isn’t the same. Today it was 63 degrees.

The Harvest Moon is the name of the full moon that occurs in September. I am sure most know that this year it was a super moon which meant it was full when it was closest to the earth and so it looked really big. The lunar eclipse added to the excitement.  It is called the Harvest Moon since that was, and still is despite warmth, the time when most crop harvests were brought in for the winter. I harvest some typical things but I began to wonder what more I could harvest.

The chickens helped me with this little challenge. They recently began molting for the first time since they were not old enough last fall. It is a little ghastly and we still aren’t used to how they look. Next year maybe we will take it in stride. It is a natural process by which they lose their feathers in spots at a time. Which means we see areas of bare skin that do begin to fill in with new feathers but the chickens look as though they are abused and neglected rather than being cherished as all our pets are/have been. They don’t peck each other so we have never seen their skin bare. Their necks look especially ugly. They don’t seem to mind it and get enough warmth from other feathered areas as they only come off in little spots at a time. I look them over each day to be sure they are healthy so I have to look at those areas too. Quickly. I won’t take any pictures of them now!

But it was molting that got me to thinking about harvest and history. Their outer feathers have the purpose of keeping rain and dirt away from the body much as a dual coated dog or sheep get with their coarser outer coat. The expression “madder than a wet hen” comes from the fact that if they get wet they are at a greater risk of developing a respiratory disease. Chickens easily succumb to respiratory diseases. So they don’t like wet. The undercoat is soft, downy and keeps them warm. As I saw these feathers around I began to think of what people did in the old days when they were used  everything that came their way and wasted nothing. What could I do with feathers that have come my way?

I don’t need to use the quills for a pen. As a left handed person it would just mean that I would get ink on side of my hand that was on the paper since my hand goes over the writing, not before it. So it’s good I don’t need that. But then I realized I could bind together the long outer feathers for a feather duster. So I am gathering them and gently soaking them to be sure they are clean. I don’t know how well it will work or if it would have been the soft undercoat that was used. I am not motivated to gather the undercoat this time because it seems dirtier and more work to clean. I could use them to stuff a pillow I weave. Maybe next year.

So I am harvesting the feathers for me and our kitten. She likes this new toy. She is so very fierce.

I have always harvested other more typical things. I froze our tomatoes and dried our herbs. I had many green tomatoes which I brought in before the frost and let them redden up inside.  My grandmother would put her geraniums near a sunny window in their huge Victorian attic to overwinter and I have done that also. I put them in my fiber studio upstairs as my attic window is small. They get a bit leggy for lack of the full outdoor light they want but it works out. 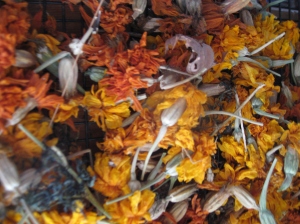 ! have brought in marigolds that I will eventually use for a natural dye.  I add onion skins to the dye pot and a bright yellow results. The tint of it varies from pot to pot each year which also makes it interesting. I am also drying some of their seeds for next year. More on that risky possibly scary outcome next time.

The continued warmth means I can continue to harvest the sun to dry my clothes. The compost heap can still be fed because it isn’t all frozen yet.  Next spring the chicken’s composted manure, bedding, and all the vegetable and other scraps that they don’t eat will provide a rich nutritious compost to help my plants grow like weeds.

The smaller feathers in the coop get buried in their bedding with their manure. I  harness/harvest their manure during cold weather to provide a little warmth for them. Odd as it may sound to non chicken people, and it sure did to me, a neat nick, there is a method to use their manure to help them overwinter in cold climates. My first criteria for a breed was one that was winter hardy but we still make changes to help them stay warm. Deep bedding means I don’t put the manure in the compost heap now as I do in warm weather. I bury it deep into the bedding and keep the bedding layer deeper in the winter. The idea is that the manure breaks down and provides some warmth just as a compost heap is warm internally in the summer. Being buried every day or so the books told me meant it didn’t smell. I was skeptical but it really did work. They never had behavioral changes that indicated they were cold.

We do not lack for fallen leaves and much of them are composted. I take others to put in the back of the hen house for bedding. My husband doesn’t want them in the front area where he walks because he can’t tell what may be camouflaged that he wouldn’t want to step on. I can respect that.

I have found on our one acre that there is plenty to harvest. There is a term called permaculture which suggests we should look at patterns in nature on our properties whether a farm or a tiny lot and apply those patterns to our management of our property. Following permaculture even to a small degree enables us to be more ecologically responsible because we will waste less, work with nature and be more resilient and more self sufficient. It is a holistic approach and its application varies depending on each person’s location and resources. As with any idea I pick and choose what to use. For example, a more dedicated permaculturist than I would eat those chickens when they stop laying eggs. Not me. But I think it is a fun challenge to see what parts of it fit me and then to try them. I figure every bit helps.