Recently we completed the once a year task of cleaning out the hen house. It takes a few hours and I have learned to do everything except the bedding on the prior day so the whole thing is less overwhelming. We need to be home all day since I also scrub the concrete areas that were under the most dirty bedding and that takes time to dry.

We only have 3 chickens and get so many eggs from them that we don’t need more. 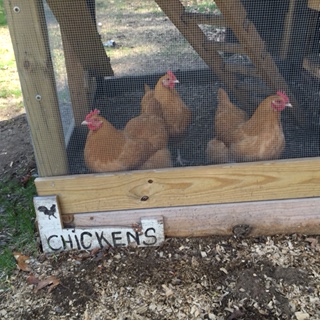 Caring for them takes just a few minutes each day so the only real work is their spring cleaning.

I come from a line of chicken farmers and even have the distinction of having an uncle in the Nebraska Poultry Hall of Fame. 🙂    I did not grow up with these people so they did not influence or teach me anything. Like spinning it just came from within. They were farmers and I am not. They probably rolled over in their graves when they saw the care these 3 get. When Lilac, Marigold and Daisy-Dandy (named by children on the street since historically we have called our pets Kitty and Bunny and are trying to reform) stop producing eggs I won’t eat them. They will live out their lives as pets. I don’t claim to have a farmer’s mindset.

A farmer does not occasionally set up activities to keep chickens from getting bored. This picture was taken before they reached their current size.

Like any cleaning it is tedious but there is satisfaction in the freshness that results. Another benefit of cleaning is that I get to see two dates written in concrete. We know their home is old and that previous owners were allowed to keep it closer to the property line than is usually allowed because they said it was “historic.” The inside has wide boards which are typical of older structures but we have never researched to find its age.Being a New Englander with a proclivity for history helps me to enjoy the time I spend in there because it is a connection to the past. Our house was built in the 1830s as was the barn/garage so this hen house may also be old. I love the doors.

Here are the dates. I wish the pictures were better. They aren’t old but we can see that the previous owner who was here for 60 years wrote October 1953. I put S + B 2014 when Steve added more concrete elsewhere. 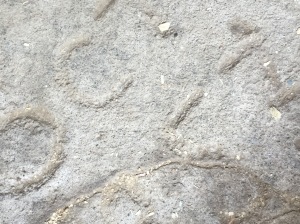 Since we have so many predators we can’t let them free range. I would love to see them out there on their own but they wouldn’t last long. So, Steve made what is called a “Chicken Tractor” so we can wheel them around the yard so they can forage safely. Talk about being spoiled. In this picture it is the part that is up against their outdoor run. 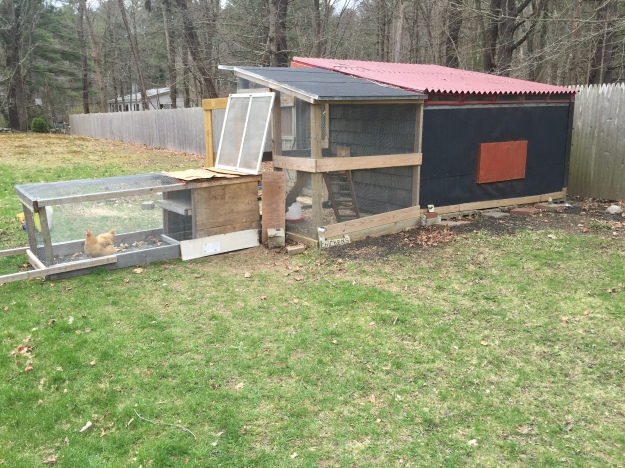 After they started laying I gained a better understanding of the feeling that people speak of that we and the chickens are working together to provide food for us. Their manure is composted and helps our flowers and vegetables to grow but beyond that are the eggs that keep coming and coming. We give most away because we don’t need a dozen and a half a week. With their efforts we can bake at will and continually have a ready source of protein.

Courtesy of our chickens

All I know is that it feels very natural to me to be caring for them and enjoying them. For those who aren’t familiar with chickens, I can say that they are very amusing and have unique personalities. I know if I sit down with them that Lilac will jump on my knee and Daisy-Dandy will avoid being touched. I know Marigold will peck at my leg if she feels I am taking too long to get their treat out. Who wouldn’t be in a rush to eat dried mealworms and corn. They are very curious like me and carefully check out anything new in any of their enclosures. We know their many different vocalizations and what they mean just from being around them.  Also like me they don’t like change or disruption. Earlier two were complaining because we have men doing work on our house that includes drilling. They got used to it. One day last winter they were putting up a ruckus so Steve looked out and saw them squawking at a deer in the yard.

Other than when remarking on affronts such as those, they are very peaceful. I feel peaceful just sitting here watching them out the window and writing about them. I have no complaints about being a housekeeper for chickens.

8 thoughts on “Housekeeper for Chickens”