It is said that the best things in life are free and I would say that many are free. I finally got back to doing some weeding this morning and went out about 9 so I could stay in the shade as it moved.

As I weeded and transplanted I began thinking about all the plants here that were given to me, or were here when we moved in. I took a picture of the vermillion (I have also seen it spelled with only 1 “l”) astilbe that I put there 2 summers ago. I am sending the picture to my lifelong friend because her father gave it to me out of one of his  gardens. I spent a great deal of time in that house growing up and I treasure it.

Then I started noticing all the other flowering plants and bushes with similar colors.

This spirea and at least a dozen of its cousins were here when we moved in as was this rose bush.  We had a heavy infestation of winter moth caterpillars this spring. I saw what seemed like an infinite number of them hanging one day from our apple trees and realized the chickens might like to eat them.  I started gathering them, as they hung by their yucky strings from branches, on the trowel I had just used to put things in the compost heap. If anyone saw me they might have thought I was acting like Don Quixote tilting at windmills as I swept my sword (trowel) around to get them. The chickens were indeed happy and I felt slightly victorious.. 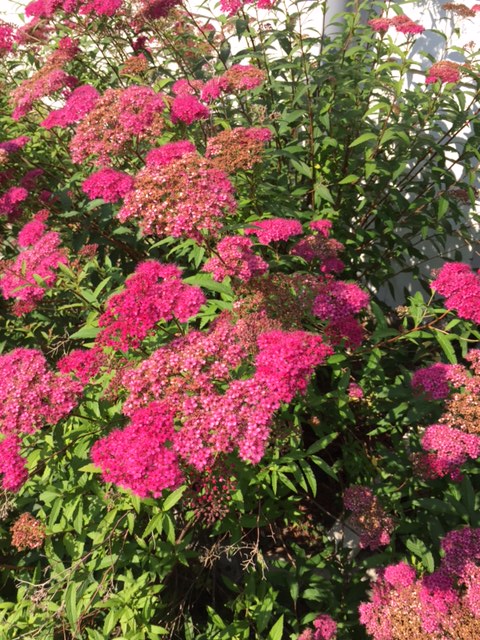 But back to the little rose bush. It too was there when we moved in. The results of its infestation can be seen but it is gathering its energy and surging forward with blossoms anyway.  Not so the apple trees. New foliage has grown but we won’t have blossoms there. Luckily the pear tree doesn’t interest the moths. 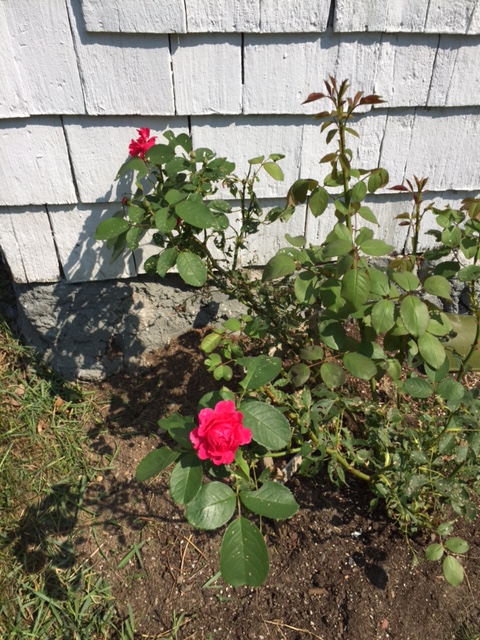 This hanging plant was sort of free for me anyway as it was a Mother’s Day present from my husband.

This lavender was from a group of herbs my son gave me a few years ago.  The butterflies and bees and I are drawn to it. Long ago when I started gardening it was common to see honey bees out gathering. They have been decimated and I never see them now but bumblebees are all around as are other wild pollinators. This picture shows a white butterfly and a bumblebee but the bee is hard to see. It is the couple of dark spots in the upper left corner of the plant.

Lavender with butterfly and bumblebee dining

Steve was just given these two pots of salvia. I will eventually plant them but like them on the deck right now.

I do have many more perennials of other colors.  It is said that perennial flowers are like friends for gardeners because their return is always watched for and celebrated after winter. My hanging plant won’t survive but all my perennials and the memories I have of them will keep on growing for years to come.

6 thoughts on “The Morning in Vermillion”